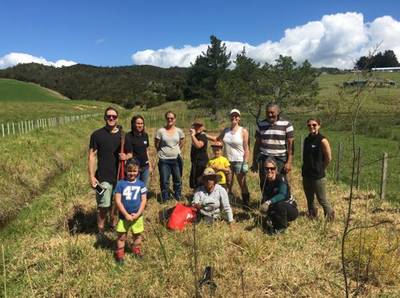 2020 heralds hope and anticipation for a Takahiwai stream thanks to hundreds of volunteers and locals who have helped Whitebait Connection (WBC) breathe new life into the waterway.

It is widely known that native fish populations in New Zealand are in decline, which is partially due to the damage we have done to the spawning habitat of īnanga.  This species makes up over 90% of the whitebait catch, is an important food source for many creatures (incuding us), and can act as an important indicator of waterway health.  Unfortunately, the habitat needed for their eggs to survive is often damaged or absent.  Such is the case for the Takahiwai Stream…or is it?

Since 2014, this project has seen various groups including tangata whenua, schools and local businesses, creating more suitable habitat through streambank recontouring and riparian planting. Surveys aimed at finding īnanga eggs and the monitoring of juvenile and adult populations of īnanga have also been undertaken and made possible thanks to funding from Foundation North and Million Metres.

Throughout 2019, Takahiwai Stream was full of activity including inanga spawning benches being installed and donned with hay bales acting as temporary spawning habitat while the newly planted vegetation establishes.  Regular water quality, egg and inanga populations surveys were undertaken.  Pest monitoring and control was also undertaken as rodents, especially mice, are known predators of inanga eggs.  This mahi will continue throughout 2020 to further improve spawning habitat and water quality.

Restoration efforts were especially proven to be a success when local rangatahi discovered a small patch of īnanga eggs in April 2019.

But it doesn’t stop there…

It is anticipated that last year’s plantings will become established enough to increase spawning success in the 2020 spawning season. Further riparian planting will be undertaken at another local landowner’s neighbouring property, which will result in native vegetation spanning the full length of the stream from the mountains to the sea.  In addition, Patuharakeke Te Iwi Trust Board’s Taiao Unit will be starting a new project focussed on the upstream health of the Takahiwai Stream and three other Takahiwai waterways.  This mahi will be guided by a wider strategy identifying key areas for restoration, with the aim of establishing a baseline for ongoing monitoring.

Thank you to everyone involved so far, including (but certainly not limited to):