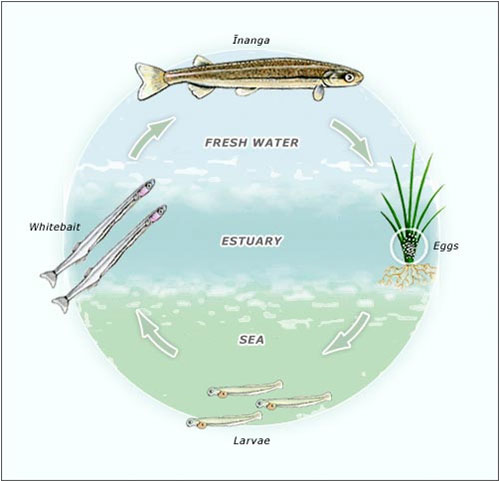 Giant kokopu (G. argenteus), short-jawed kokopu (G. postvectis) and smelt (Retropinna retropinna) are also occasionally present along with the young of many other fish such as eels, bullies and trout.

Find out how to identify whitebait here

All whitebait species spend part of their life cycle in fresh water and part in the sea. Tiny fish hatch in late autumn and are carried along rivers out to sea where they live and grow over the winter.

Inanga (Galaxias maculatus)In late winter and early spring whitebait migrate back up rivers and streams, finally settling and growing in bush covered streams and swamps. The start of the migration is thought to be influenced by river flows (i.e. shortly after floods) and phases of the moon.

Mature īnanga adults migrate downstream to lower river sections and estuaries to spawn in grasses covered by water during spring tides. The eggs remain in the grass until the next spring tide covers them again when the young hatch and are carried out to sea. The spawning habits of other whitebait species are not well known.

The five galaxiid species are found in many different habitats from lowland swamps to rocky streams. Their presence appears to be closely tied to overhead cover and waterside vegetation.

One of the major problems affecting the whitebait fishery is the destruction of habitat for egg laying or adult fish. As whitebait adults tend to live in natural swamps and bush covered streams it is in the best interest of whitebaiters to ensure that adequate areas of these habitats remain.

Another major problem is barriers that stop young fish from getting to adult habitat.

Please note that whitebait are native fish and the giant and short-jawed kokopu are under threat in many areas.

Your assistance in keeping the whitebait fishery healthy not only benefits you, but the health of New Zealand's natural living systems. Don't take more than you need.