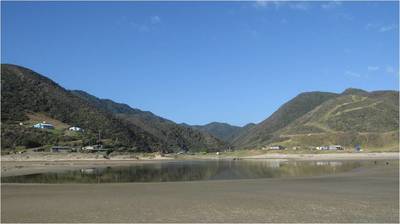 This small, isolated rural school has a roll of 24 children in years 1 to 8. The whole school was involved in the WBC programme in Term One 2013 with WBC coordinator Soozee McIntyre, including 3 teachers and a teacher aide.

Some of the students had been involved in making a short film about the coastal/marine environment the previous year and were familiar with the connection between fresh and salt water species and the environmental influences on both. They were excited to expand their knowledge of the freshwater environment in a landscape that is dominated by the open ocean.

Mitimiti sits at the bottom of a fairly short, steep catchment that is dominated by the native bush of Warawara Forest. There is only a narrow coastal strip with a few scattered houses and some grazing land – mostly occupied by horses, which have access to both fresh and salt water margins.

The goal was to strengthen the understanding of the connections between the fresh water and the coastal/marine environment and deepen the appreciation of the rich natural environment surrounding the school. 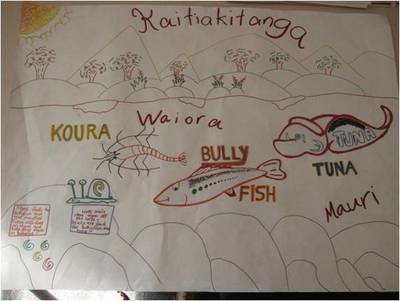 The objective was to investigate the freshwater biodiversity of the Moetangi River and communicate the findings to whanau.

Children and teachers were amazed to find so many interesting critters in a stream where they generally only pursued eels. On learning of the connections within the food web, their existing sense of being kaitiaki was strengthened as they realized the inter-dependence of the species.

Check out pictures and findings from their field trip here. (pdf 5.2mb)

Many of the children reported discussing their findings with their families (see feedback below) and they also made big posters showing their new knowledge. The school is keen to take on a regular monitoring role on the Moetangi river and also on the smaller stream that runs by the marae just south of the school. Later in 2013 (when the weather is more settled) they would like to involve the community by holding a wananga at the marae and getting more adults involved in investigating the awa.

Some remarks from the student evaluation forms:

“I told my mum and my nana about how the cows should be kept away from the river – plant harakeke”.
“Eels are our guardians of the water”.
“We need more tuna in the rivers to clean the water and restore the mauri”. 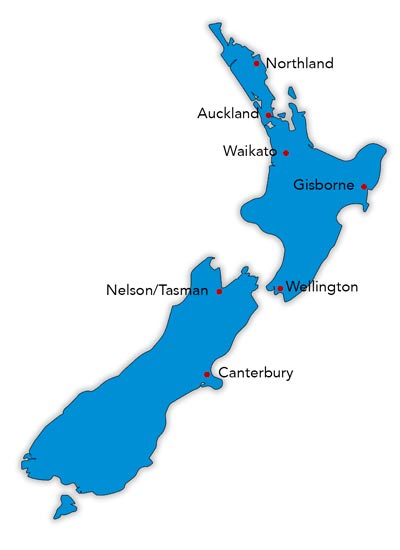