Ruawai Primary School, found near the shores of the Northern Wairoa River in the Kaipara Harbour participated in the Whitebait Connection Programme in term 2, 2012. The school staff and WBC Coordinator Nicki were hard pressed to find a nearby stream safe and interesting enough to investigate, as all waterways near the school are dug out drains which flow into the tidal Northern Wairoa River. So, it was decided to take the whole school to compare two of the Kaipara's most pristine freshwater environments – Kai Iwi Lakes and Trounson Kauri Park. 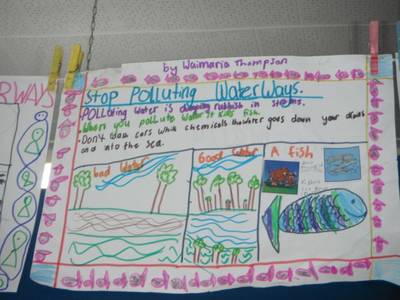 After the in-class Whitebait Connection introduction and field trip preparation sessions the students along with parents and school staff travelled to Trounson Kauri Park to meet with Department of Conservation staff Darren, Matthew and Geoff. The students were ready and armed with many questions including:

1. What percentage of the world’s freshwater is in NZ? Do we have a lot of freshwater?

2. What are the main streams, rivers and lakes in Northland? In the Kaipara area?

3. What comes between salty and freshwater? What lives there?

5. What plants and animals live in freshwater in NZ? What do they feed on and what sort of habitat do they need to survive?

- How many species of eels do we have in our freshwater?

- What freshwater fish do we have in Northland? How many species?

- What native freshwater fish do we have?

6. Are most of our rivers and lakes polluted? How can we clean them up?

The next field trip was to the Kai Iwi sand dune lakes where students investigated the unique life found in the crystal clear water. Matua Buck and Nicki from the Whitebait Connection provided plants from He Kakano Community Nursery for the students to contribute toward the revegetation of the Kai Iwi Lakes small catchment. In 2009 large pine trees covering the land around the popular freshwater lakes were removed with the goal of revegetating the area in native plants. “We can't wait until it is covered in trees again!” students said.

Ruawai School students really proved they were kaitiaki of the freshwater environments by preparing posters, researching their local waterways and promoting care for the waterways to their families. Thank you Ruawai Primary staff, students and families for your dedication to learning, experiencing and caring for freshwater in the Kaipara!

Please contact Ruawai Primary School's Whitebait Connection Coordinator Nicki Wakefield on This email address is being protected from spambots. You need JavaScript enabled to view it. for more information on their programme. Thanks to ASB Community Trust for funding Ruawai's programme.